Sourcing & Manufacturing in Vietnam: An Introduction

Sourcing & Manufacturing in Vietnam: An Introduction 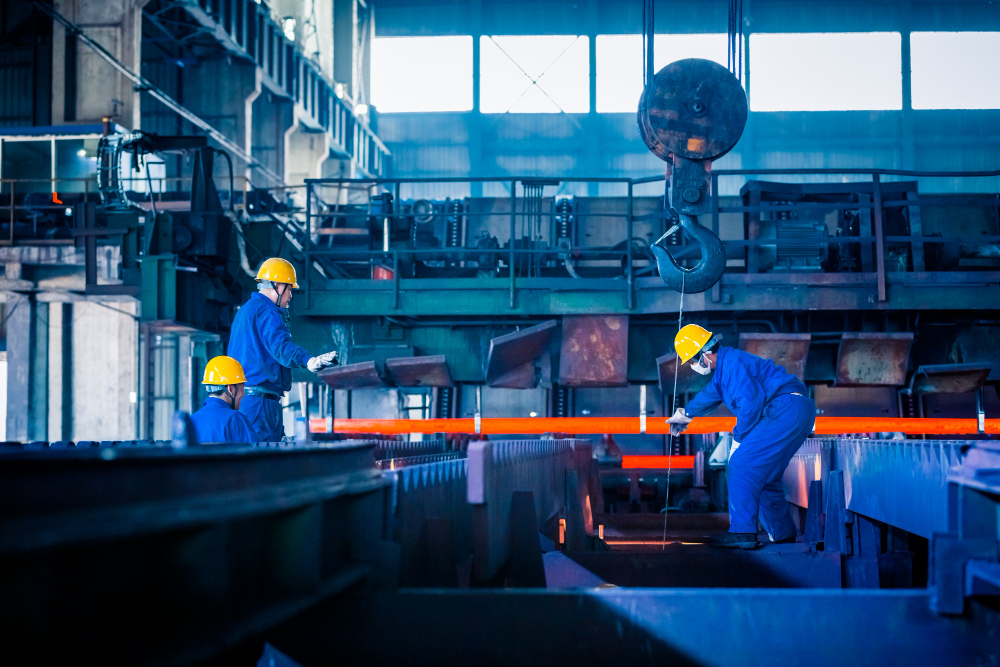 In recent years, Vietnam has emerged as one of Southeast Asia's biggest recipients of foreign investment. The benefits here come from both economic and demographic factors.
Global events and supply chain disruptions have also helped Vietnam by educating foreign businesses about the value of diversifying supply chains.

Companies have been pushed to move production to avoid tariffs and to rely on a single market as a result of the US-China Trade War and the Covid-19 epidemic.
In this essay, we examine Vietnam's advantages as a manufacturing location and the reasons behind its rise to prominence in Asia.

Vietnam is now a popular location for manufacturing thanks to both outside factors and nation-specific traits. Some of the main advantages of selecting Vietnam for your manufacturing operations are listed below.

Due to Vietnam's affordable labor, major corporations in the textile and electronics sectors have moved a lot of production there. In addition to labor costs being on par with China's on average, wages also grow more slowly.

While we can't compare labor costs exclusively when choosing a nation for production, larger corporations like Adidas, Samsung, and the like may find it to be a deal-breaker.

Companies' decisions to forgo relocations altogether or to shift only a portion of the production are also influenced by shipping costs, productivity, and the maturity of the current supply networks.

Vietnam's population will rise significantly during the next ten years, although it is declining or very slightly increasing in Thailand, Malaysia, and China.

Vietnam currently has a population of over 98 million people, and by 2030, that number is expected to rise to almost 106 million. Naturally, this will increase the labor pool, which presently includes 56% of the population.

Vietnam has a younger population than China and Japan, with an average age of 32.

Vietnam is renowned for producing a large amount of textiles and apparel. Manufacturing of more sophisticated goods, including machinery, consumer electronics, telecom equipment, and automobile parts, has significantly increased in recent years.

For instance, Samsung, the largest exporter from Vietnam, manufactures a third of its output there.

Vietnam is a part of the ASEAN Free Trade Area as an ASEAN member (AFTA).

Various free trade agreements have also been concluded between Vietnam and important economies like Japan and Korea.

In 2020, the EU-Vietnam Free Trade Agreement (EVFTA) went into effect. The EU and Vietnam intend to eliminate 99 percent of all customs fees as a result of the FTA.

Additionally, Vietnam and the US have a bilateral trade agreement with tariffs that adhere to the WTO rules.

What Kinds of Products are Made in Vietnam?

Vietnam has emerged as a prime location for the production of a wide range of goods. We examine the main product categories in this section based on the value of exports.

As an exporting country, Vietnam's exports of electronics are essential. The first foreign corporations to establish sizable industrial facilities were Samsung and Intel, and Japanese multinationals soon followed in the North.

As of 2021, the following goods accounted for the majority of electronic exports:

Vietnam has historically been a significant producer of textile goods, and it still is. The overall annual exports of textile and apparel products are in the range of 40 billion USD. When compared to electronics exports, which continue to dominate, this is only around a third.

All clothing, in general, but notably the footwear industry, is very large. Due to Vietnam's sophisticated supply network, inexpensive labor, and advantageous trade agreements, many well-known brands, including Nike, Adidas, and Skechers, have moved a significant percentage of production there.

Furniture
Vietnam has a long history of producing a lot of furniture and wood products in addition to textiles. Provinces like Dong Nai and Binh Duong have a large number of furniture-producing businesses, both small and large.

The province of Binh Duong, which is close to Ho Chi Minh City, produces more than half of the wood goods.

Vietnamese Customs reports that the value of wood product exports increased by almost 22% in 2021 compared to 2020, totaling USD 9.3 billion.

Notably, a historic transition occurred in 2021 when Vietnam overtook China as the largest exporter of wood to the US.

We observe a high density of industry in the North and the South while having a land area comparable to Malaysia and Finland. More over 70% of the 6,000 factories that make up the total are located in or close to Hanoi and Ho Chi Minh City.

Let's examine some of the most significant provinces and cities, as well as what makes them unique.

The largest city in Vietnam, Ho Chi Minh City, is situated in the South. With a population of more than 9.2 million, it is regarded as the financial hub and makes the largest contribution to the GDP of the country.

Large advanced electronics producers like Samsung, Jabil, and others can be located in the outlying regions like District 9. There aren't many factories in District 2, which borders District 9, however there are lots of showrooms.

Three areas of Ho Chi Minh City's Western region—Cu Chi, Hoc Mon, and Binh Chanh—have a significant amount of furniture production. Having said that, these factories are not as large as those in Dong Nai and Binh Duong.

With its proximity to Ho Chi Minh City in the northeast, Binh Duong is regarded as one of Vietnam's most significant manufacturing centers. The province includes an estimated 2.7 million residents and vital transportation infrastructure.

The importance of Binh Duong province as a center of industry is demonstrated by the fact that it receives the second-largest amount of foreign direct investments nationwide, behind Ho Chi Minh City.

Many manufacturers in the agricultural, chemical, textile, and furniture industries are based in Binh Duong. Nike, Adidas, and H&M are a few examples of multinational firms with plants in this country.

In the province, LEGO is also establishing sizable production facilities.

One of the most significant manufacturing provinces, Dong Nai is situated to the south of Binh Duong and borders Ho Chi Minh City to the east.

Dong Nai is the location of numerous textile, electronics, and clothing manufacturers in addition to its extensive agricultural product output. More than 3 million people call Dong Nai home, and it has one of the most significant transportation systems in the South.

Companies with plants here include Hyosung, Bosch, Schaeffler, and others.

One of Vietnam's main airports, Long Thanh International Airport, will be developed in Dong Nai, greatly benefiting the region. The airport's capacity will increase to 100 million passengers and 5 million tons of cargo annually by 2040.

The capital of the North and a significant economic hub is Hanoi. The city is home to ten industrial parks and a sizable number of businesses in the heavy, electronics, and communications sectors.

The industries that received the highest investments in 2021, totaling 44 percent, were electricity and electronics. With 24 percent, the mechanical engineering sector came in second, followed by other sectors at 32 percent.

Japanese electronics producers with a significant presence in Northern Hanoi include Denso, Panasonic, Sumitomo, Canon, and Molex. This area is home to Thang Long Industrial Park, which opened in 1997 and counts Sumitomo as a significant investor.

On the outskirts of Hanoi, there are numerous industrial parks where a lot of electronics are produced.

Vietnam's smallest province, Bac Ninh, is crucial for regional industry activity despite its modest size. The province is ideally situated alongside vital thoroughfares that connect China and Vietnam.

Companies like Nokia, Canon, ABB, and Samsung produce a lot of machinery and electronics in the province. Bac Ninh is home to three of Samsung's six facilities, and the province will see an increase in investment over the next few years.

Many agricultural goods are grown in the province of Bac Giang, which is around 50 kilometers from Hanoi. A large portion of its fruits are sold to neighboring regions of China and Vietnam.

Due to its developed infrastructure and proximity to China, the province of Bac Giang has grown in importance for the production of more sophisticated goods. Here, Foxconn has established production worth hundreds of millions of dollars in US.

The electronics, textiles, and solar panel industries are the main targets of foreign investment.

In terms of population, Haiphong is the third-largest city in Vietnam and one of the country's most significant economic hubs. It has the most significant seaport in the North and is situated along the shoreline near to the Gulf of Tonkin.

The electronics and automotive industries in the city have a lot of manufacturing. LG made the decision to relocate all of its smartphone manufacturing to Haiphong in 2019. It also experienced the fastest growth in Vietnam, increasing by more than 15% in 2021.

Can Vietnam Take Over as a Manufacturing Hub from China?

Vietnam won't entirely take the place of China. Vietnam still has less developed supply chains, and its exports are only about 10% of China's. Since many businesses have made significant long-term investments in China, total relocations are no longer profitable.

Additionally, despite the fact that we are seeing more sophisticated manufacture of goods like machinery, electronics, and telecom equipment, Vietnam still imports a significant amount of sub-components from China.

In addition, it makes sense to keep at least some of the production there due to the expanding Chinese consumer market.

However, there are a few factors driving the desire of more businesses to diversify their manufacturing out of China. Examples include heavy tariffs, rising expenses, and interruptions in global supply chains.

China Plus One is a name that has been coined to describe this business strategy. The neighboring markets have come to the attention of businesses as a result of rising expenses in China and legislative changes.

One of the biggest recipients of foreign investment in Asia and a key center for manufacturing is Vietnam. More businesses are looking to manufacture here as a result of external factors, global supply chain disruptions, and country-specific advantages.

Manufacturers of textiles and furnishings have long been drawn to Vietnam. Multinational corporations now set up factories to produce more modern goods, such as machinery, electronics, and telecommunications gear.

Vietnam offers advantages as a location for manufacturing, such as reduced labor costs, a wide range of trade agreements, improved manufacturing capabilities, and a huge labor pool.

Vietnam will still receive a sizable investment from businesses looking to diversify and use China Plus One business strategies, even though it won't replace China as the world's manufacturing hub.